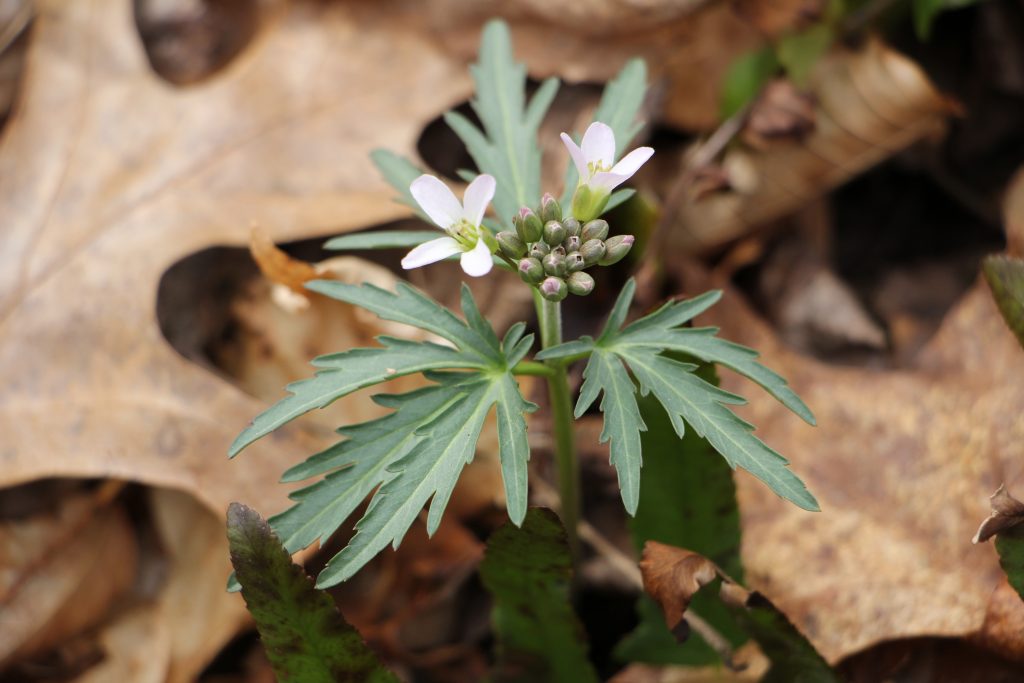 Last week for #sciencesaturday, we learned about three of the spring ephemerals blooming at the Preserve. As truly ephemeral, those plants bloom, seed, and die before the leafing canopy trees block the sunlight from reaching the forest floor. However, there are some other spring ephemerals, that often get misclassified. These imposters still bloom early and briefly, but their leaves remain visible much longer, especially in areas of the Preserve where they get more moisture. The following four species are not as ephemeral, but still stunning flowers to identify!

Named for roots (and leaves/stem) that yield a red-orange juice that will dye your skin or clothes, bloodroot (Sanguinaria canadensis) is noticeable as a singular, naked stem with eight to ten white petals. The petals cluster around golden yellow-tipped stamens, and the flower only blooms for a day or so before it dies. One green leaf wraps around the flower stalk and opens to full size as the flower wilts. 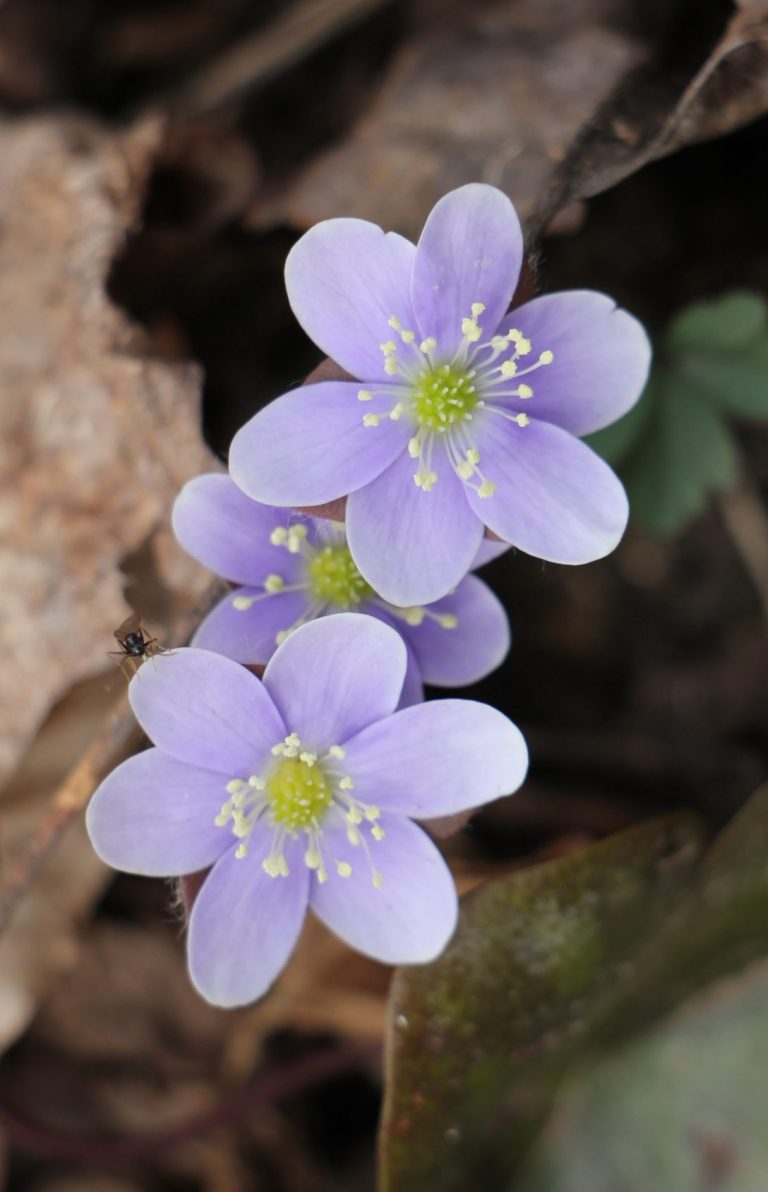 Also known as liverleaf or liverwort (Hepatica nobilis var. obtusa, renamed Anemone americana), round-lobed hepatica’s three clover-like leaves are actually evergreen. The solid or two-toned green leaves are visible on the forest ground throughout winter, and wither away once the plant bloom in spring. Many of the leaves are a bright purple color underneath if you flip them over, similar to the cranefly orchid! With flower petals that range from white to purple, they grow on a hairy leafless stalk. Behind each flower are three hairy, rounded tipped bracts. 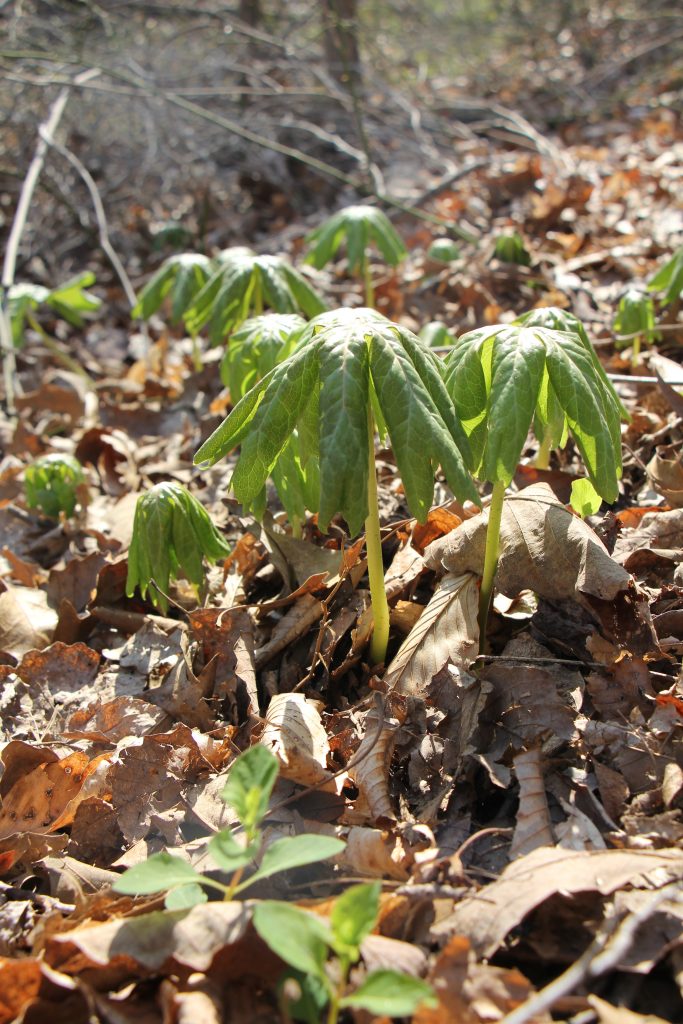 With distinctive umbrella-like leaves palmately lobed in five to nine parts, mayapple (Podophyllum peltatum) can form large colonies. Spreading from a single root system (rhizomes), this herbaceous perennial typically grows open deciduous forests, riverbanks, and roadsides. The leaves start folded as the stem grows during the spring, unfurling once it nears full height.Only stems with more than one leaf will flower, and its white flower petals become an oval berry about 2 inches long that ripens to yellow.

Jack-in-the-Pulpit (Arisaema triphyllum) gets its name from the shape of the flower, with the club (the “Jack”, or spadix) sitting in a tubular base with a hood (the “pulpit”, or spathe). This appearance is similar to the skunk cabbage we learned about as a spotlight species several weeks ago! Its fruit starts as a cluster of green berries that will turn bright red as they ripen later in the summer. This flower has both male and female plants, and they are able to change gender from year to year. Male plants have a hole at the base of the spathe (to allow pollinators to escape), whereas female plants do not have the hole (to ensuring successful pollination but trapping the pollinators longer).

Often confused for poison ivy as it has three shiny green leaves, however, jack-in-the-pulpit’s leaflets are connected in the middle, with a distinct vein pattern: a continuous vein runs around the entire edge of each leaf, whereas the poison ivy middle leaflet has a short stalk between the other two lateral ones.

Remember, we have a no harvest policy at the Preserve, so please do not pick these flowers or try to take them home! They are difficult or incredibly slow to propagate and must have very particular conditions to survive. These plants will likely die following any attempts to transplant them. Instead, take a picture of the spring ephemerals you find (true or tricky ones), and upload them to the Bull Run Mountains Preserve iNaturalist project! 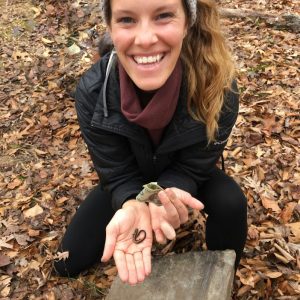