Insects, the Apocalypse, and Everything In General

Hello everyone! It seems like this summer has gone by in a flash! I am already done with my trapping and have continued on to insect identification. Being out in the mountains every week was such a fantastic experience, and I am definitely going to miss this view (even if the view is 102 degrees out…)

My favorite things about field work this summer were:

My last day of field work was super intense! I hiked a 9-mile circuit in 98 degrees and finished during the onset of a summer thunderstorm – talk about going out with a bang!

Since field work is over, I have shifted focus to identification and analysis of the specimens I have collected over the past several weeks. It’s nice to be working back in air conditioning. At the end of this project there will be information on which species are found in Catharpin creek (hint, it’s a super healthy creek!), lots of terrestrial insect analysis (ant species density, ground beetle presence, the MASSIVE amount of daddy longlegs that found their way into my traps- yes I know they’re not insects), and some good, old fashioned rows and rows and rows of data!

I have found three absolutely vital things that help me through insect identification: 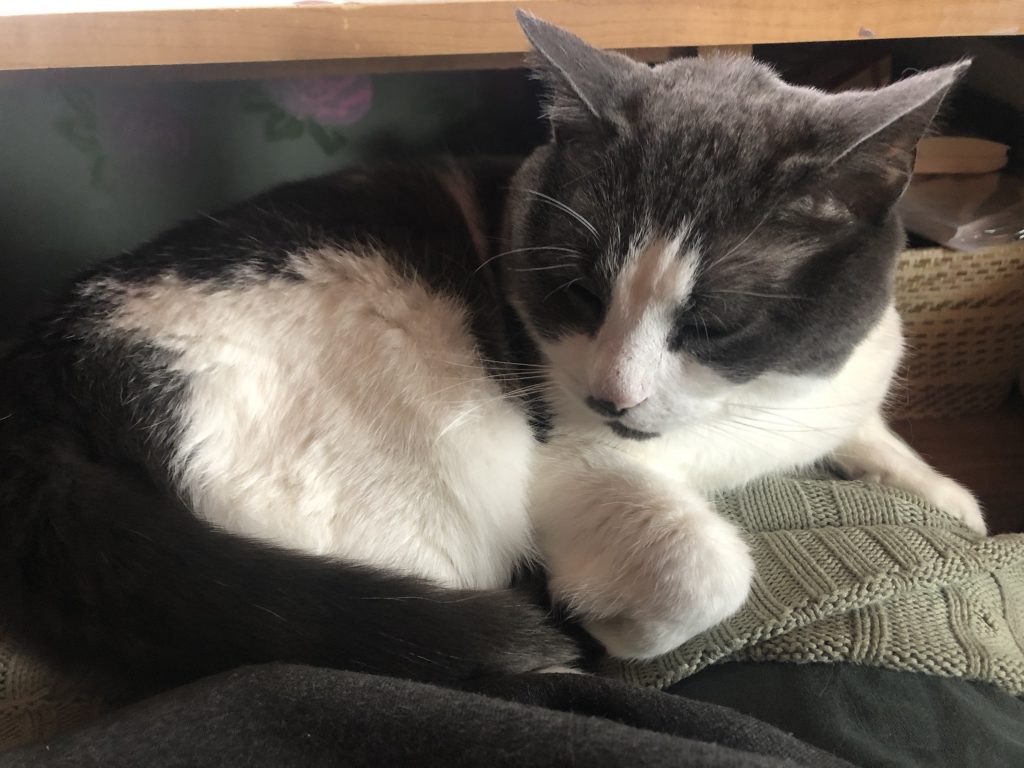 My cat has to stay on my lap, though, as he has displayed an ALARMING and impassioned desire to consume ethanol-soaked insects. I have no idea the potential that such a snack holds for him, as I do not think (personally, as a human) they are all that appetizing. Entomophagy (the practice of eating insects) is supposed to be the new “thing” though, so liquor infused insects may replace liquor infused chocolates!

Speaking of insects, I would like to speak briefly on the 6th mass extinction event that is currently happening on earth. Pesticides, urbanization, climate change, and other factors are causing insect species mass to decrease by 2.5% each year. This may seem hard to visualize, but insects actually make up 17x the mass of all humans on earth. To avoid calculating how many insects we lose each year, I’ll convert it to humans. The collective mass of all humans is 17 million tons. 2.5% of that is 425,000 tons. There are about 15.38 humans in one ton: 15.38 x 425,000 = 6,538,455 people. That’s just two million less than the population of Sweden- and insects are WAY better for the environment than we are.

Insects are fundamental ecological cornerstones of agriculture, medicine (we have a faster way to develop vaccines thanks to an insect protein!), and maintaining ecology. They perform various ecological roles, from breaking down dead tissue, recycling nutrients, being a food source for other animals in the environment, and pollinating! It is important to remember how necessary these creatures are for our environment. I know a lot of us have a knee jerk instinct to kill the spider in our bathroom or apply heavy pesticides to our yards (and don’t get me started on green lawns…), but right now we are only in the beginning of this extinction, and drastic steps must be taken to prevent a total insect wipe-out within the next century.

The work I am doing at Bull Run Mountains Natural Area Preserve is necessary to establish a baseline for species presence and density. The data I am collecting now may be compared to data acquired from next year, next decade, or next century as scientists observe ecological trends over time. I can’t put into words how excited I am for my research to be used in the future, and to share it all with you in just a couple of weeks.

I am also looking forward to my upcoming (drum roll please………)  ENTOMOLOGY WALKS! I will be leading interactive guided hikes for groups on our South Section trail system in August! I will be exhibiting a few different trapping techniques to find bugs in different environments, talk about insect plant ecology, insect presence on the Preserve and what that potentially means about larger species presence, and some fun bug facts. Keep an eye on the Preserve’s Facebook page for the advertisement of these hikes!

Lastly, I will leave you with one of my favorite bug facts. This fact is inspired by the movie I recently watched, the Disney classic “A Bug’s Life.” I noticed that in the movie, the queen ant keeps an aphid as a pet- so cute! Well, in real life, ants also keep aphids as “pets”, or rather, they tend to them and maintain them because the aphids secrete a sugary substance that the ants eat!

As always, if anyone has any bug questions or needs an ID, you can reach out to me at meredith.hart16@gmail.com. I have had a few ID requests come in and it has been SO much fun sending them back. I love to see the insect enthusiasm! Especially for those MANTIDS, right? I know I’m not the only one seeing these gorgeous bugs meandering around – I have seen praying mantids, Carolina mantids, and Chinese mantids on the preserve! 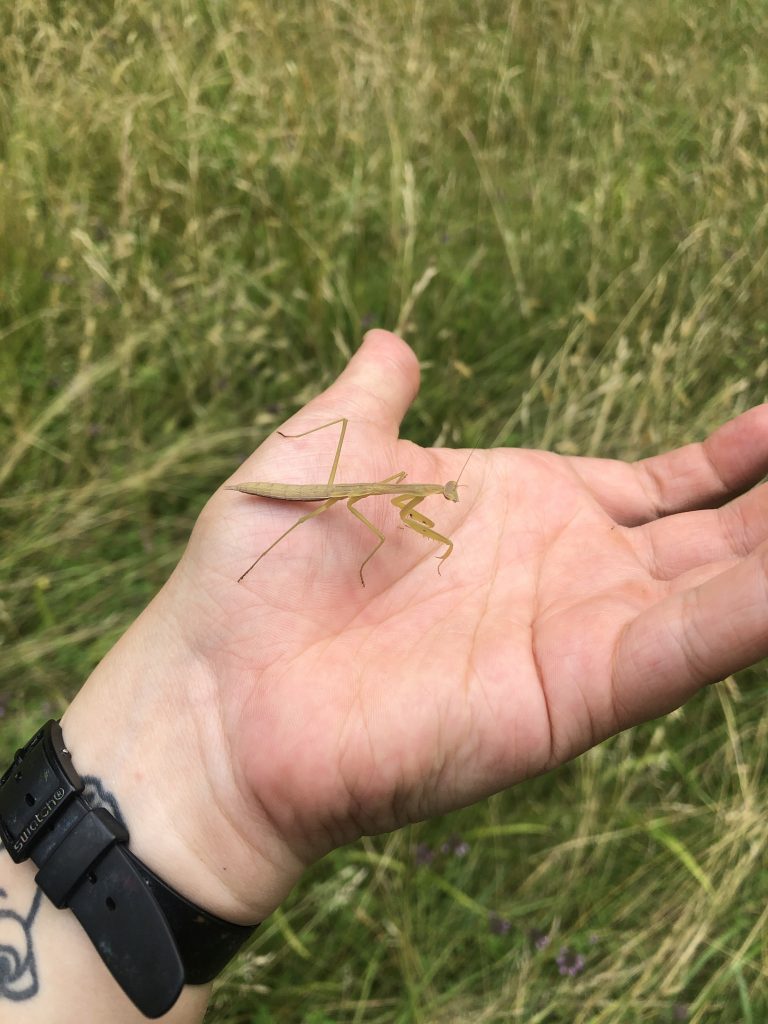 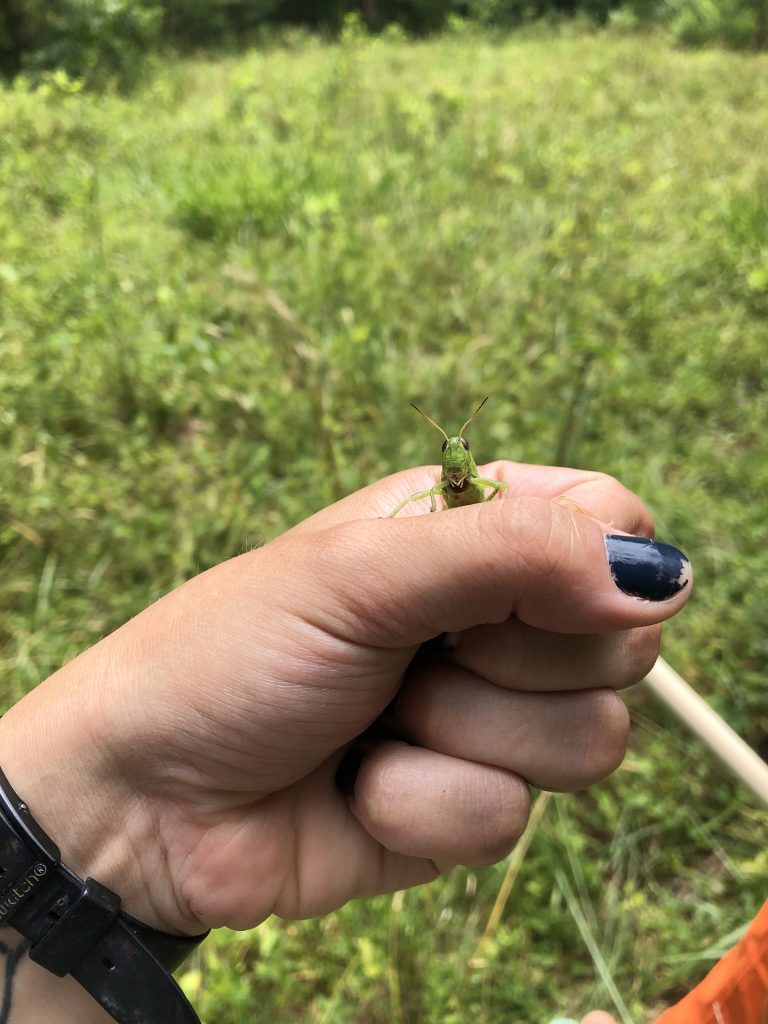 Well, this looks like it for now everyone- be kind to bugs and have a fantastic week! 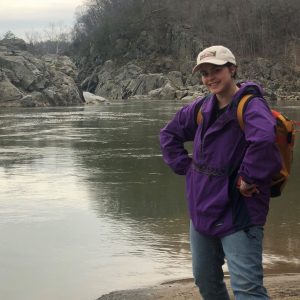